Helping The Elderly (And Ourselves) Let Go 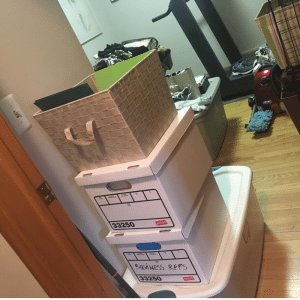 I remember as a 10 year old kid being asked to help an elderly neighbor clean out an attic she was unable to climb to anymore.  It was a beautiful attic with large, floor-length windows in an old Victorian house.  I was amazed as she requested box after box...knowing exactly where they were placed & precisely what was in them.  I was amazed because that attic was CRAM PACKED with every conceivable thing that a person could want or need.  She was sorting through things she hadn't held in 40-50 years.  She was getting them ready for a garage sale or to donate to someone who may want them as she knew her time was drawing nearer.  She had a terminal illness & wanted to do this service for her children since she didn't want to leave them with a burden of stuff to sort if she could still do it.  Why had she kept it all?  “Just in case I might need it some day.”  Old games were kept in case she came across that missing piece.  Jars were kept in case she decided to take up canning.  Bits of yarn because they were useful.  Rocking horses for great or great-great grandchildren.  Trunks full of polyester clothing might be useful for someone to wear or to make a quilt, at the very least.  Thankfully this attic was well organized & labeled or it could have been worse than it was.  Most attics, garages & other places where we keep things are not.

It seems that many of us are compelled to hold on to material items.  They are useful.  You wouldn't want to set up house without a saucepan, a frying pan & a stockpot.  The problems start to arise when a 2 person household has 5-10 saucepans, & the same amount again of frying pans & stockpots.  When the amount of clothing is unable to be worn even within on year's time.  When the pens dry up from being stored for so many years without use.

Oftentimes this is all accumulated quite innocently.  Someone passes on their items to said person.  That person, in turn, sees that the item is useful and keeps it around “just in case”.  Sometimes this works in our favor.  We've acquired an extra toaster somehow & our old one goes out the next week.  Much more often, however, the items that we accumulate sit and wait for years or for never.  So what's the harm, you say?  If the items are just going to sit there, why not let them pile up?  Because they DON'T just sit there.  Every item that you bring into your home (basement, attic, garage, shed, storage unit) has to be thought about, moved around & cared for. If more items are added, then the previous items need to be gone through & moved around in order to make space for the new.  It's all very mentally exhausting & time consuming.

The first step in letting go of these items is to recognize the mental room that you are giving to them. If you were to keep a tally of how many times thoughts like, “I should go through that” or “I should organize those” went through your head in a given day, you'd probably be surprised at the amount of head-space you're giving to innocent items lying around.

The best way to begin letting go is to gather all of the like items together into one place. Marie Kondo introduced this technique for beginning to put items in order in her book, “The Magic Art of Tidying Up”.  Do not try to de-clutter one room at a time. Start by gathering all like items in one place. If you have 10 vases in one cabinet, a couple dozen downstairs, and several others scattered throughout the house, you'll never know just how many you really have until you gather them together. Books, for instance, should all be retrieved from various parts of the house & brought to one, central location for you to go through & cull that which is no longer useful to you.  That does NOT mean that it doesn't have value, just that it's already served it's purpose in your life (or the life of your aging loved one) and that you're letting it move on to help someone else now. 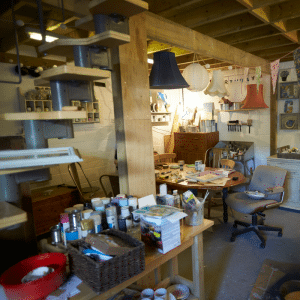 Work through why you or they may have kept so much while you cull.  Things might have been tight while you were growing up.  They may remember rationing during wars.  There may have been times of economic hardship when they or you had to use every bit of human ingenuity to scrape through & survive that time of life.  As you go through items, be thankful that they had what it took to survive & help  them realize that it wasn't the stuff that helped them survive, but rather the stuff they were made of.

Letting go will open all kinds of doors that they (and you) never realized were slowly closing.  And it will bring you a bit of room to think about what's next & where you'll go from here.  Enjoy that space. Enjoy that freedom.

Be sure to start with things that they are not emotionally attached to, then work your way to keepsakes.  It's easier to deal with the keepsakes if you leave them to the end.  Oftentimes the process of letting go becomes easier once we've dealt with the fear of not having enough.  Letting go of all of the other items, also, has the added benefit that they'll have more time to devote to things like family photos, stories & memories.  They will also have more space to display meaningful items-more time to contact those whom they've been to busy to reach out to for years.