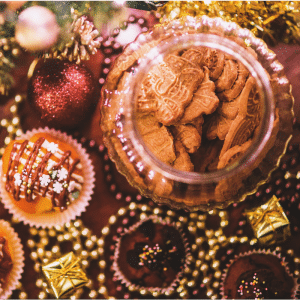 In many countries and cultures throughout the world, celebrations of major holidays revolve around loads of particular foods that are only made during that celebration.   In America, the celebration of the Christmas holiday is traditionally centered on a full host of different kinds of food. Because our cultural fingerprint has changed over time, some of the foods that were traditional for a certain subset of Americans living in a certain place has changed as they’ve accepted traditional foods from other cultures that they come into contact with.  The melting pot mentality can clearly be seen as you look over historical records of holiday foods.

As more people eked a place out of the woods for their families, they also began keeping more domesticated animals.  Eventually the ground was prepared enough to be able to have gardens that produced enough that could be prepared for larger feasts.  In the South, you’d notice that pumpkins, sweet potatoes and lemon pies became more standard fare.  In the North, you would find far more apple & pear desserts along with breads and stuffings made from the products obtained through extensive wheat fields.  Wild turkeys were often on the menu throughout the US because their range covers nearly the entire nation.  Rabbits were another common meat fare that everyone loved.

Early in our nation’s history, holiday meals were heavily dependent upon the foods that were readily available.  Venison, wild fowl and berries and nuts gathered from the forest were a large part of the fair for those who lived further inland.  For those on the coast, oysters or oyster stew, fish, ducks and geese were more common.  But if you look at the westward movement in our country, and agricultural expansion, traditions and cookbooks changed over time.

In modern times, our tables are often determined by foods that are the most readily available from processing plants, since most of us are not willing to go out and get our own foods from the land.  Turkeys and hams are often very abundant.  As food from other cultures becomes readily available at the market, many people choose to change traditions and add in things like spring rolls or tamales for their Christmas meal. 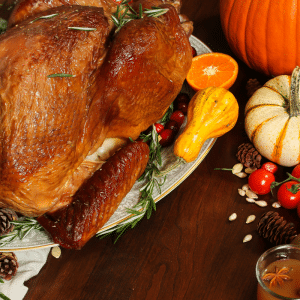 One of my most memorable Christmas meals was when the food that was brought to the table had all been raised, grown, foraged or hunted by those in attendance.  Some brought hams from a hog they’d raised & the sweetest sweet corn I’ve ever tasted.  Someone else brought a venison roast and a small amount of wild turkey & grouse.  There were pumpkin pies made from pumpkins from the garden.  Apple & pecan pies from trees in someone else’s yard.  Crackers held jalapeño/raspberry jam that was prepared by someone who had both of those things at their place.  Asparagus canned from summer, carrots and potatoes dug in the late fall.  All of the offerings were labors of love & it was not even an intentional sharing of goods, it just happened that each person had been successful in their hunting, farming and gathering that year and desired to share it with those they loved.  Perhaps the only thing that were not produced from scratch were the wheat that the bread was made from, the butter and the cheese.

While this is a nostalgic memory for me, I fully realize that this will not happen every year in the modern times in which we live.  This year while you are celebrating, consider looking at the things you already have in abundance.  Of course, we all love to have certain things on the table for the holidays, but over the full scope of history, the meals were more representative of the fare that was readily available rather than one specific dish.  The main consideration when sitting down to your holiday meal is to be thankful for those you eat with and thankful for the food you enjoy.  If those two elements are in place, it really doesn’t matter what adorns the table.  It will be a meal to remember!